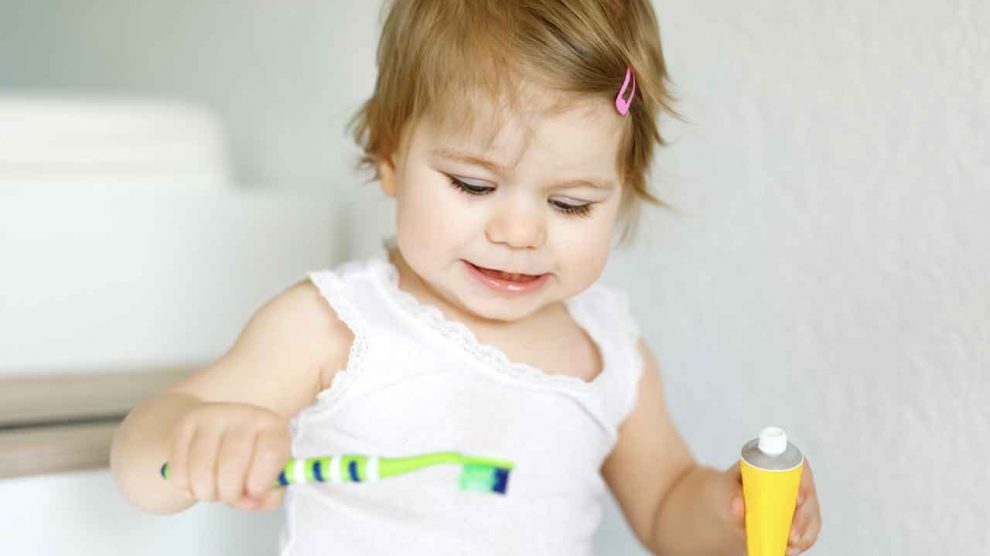 A first tooth is always exciting, but also causes quite a headache. How will you know that the baby is crying because of teething? Is teething always accompanied by pain? When should you start brushing, and how do you keep your teeth healthy and beautiful?

Our teeth are used for eating, speaking and of course for beauty, and the eruption of the first tooth in babies is a very exciting event. But the process begins much earlier: the falling teeth begin to develop already in the first stages of fetal life, and after birth they are in the jaws ready to erupt.

When does the first tooth erupt?

The growth of teeth in babies begins at the stage when the baby’s nutrition gradually turns from liquid to solid.

How do you know the first tooth is erupting?

Teething in babies starts with a front tooth – usually in the lower jaw. Before the tooth erupts, you see swelling in the gums and a white bump, which is actually the erupted tooth.

Is it true that teething in babies is accompanied by pain?

Not necessarily. Every child reacts differently: some hardly ever suffer from first tooth and/or gum pain and suddenly the parents discover that they have a tooth; And there are those who react with symptoms such as restlessness, crying and swelling of the gums.

It is important to know: preparations containing benzocaine (Benzocaine) which were intended to prevent pain during teething, are currently prohibited for use, especially under the age of two. Using them may cause methemoglobulinemia – damage to the oxygen-carrying capacity of the hemoglobin in the blood.

Symptoms include pale, grayish or bluish skin, with similar changes in the color of the lips and nails; Shortness of breath; tiredness; Headaches; dizziness; and rapid heart rate. They may appear within minutes to two hours of exposure to the preparations, after the first use or after several exposures. If these symptoms appear after exposure to benzocaine, you should seek medical evaluation as soon as possible.

Are there other signs of teething in babies?

No. Sometimes side effects unrelated to teething in babies are attributed to it, such as diarrhoea , fever and vomiting .

How long does teething last in babies?

The rate of teeth growth varies from baby to baby. Sometimes the teeth erupt quickly one after the other, and sometimes they erupt at a slower rate. Tooth growth usually ends around two to three years of age. Upon completion of the process, the child’s mouth will have 20 deciduous teeth (milk teeth).

How to keep the teeth beautiful and healthy?

To maintain oral and dental hygiene, it is important to inculcate proper health habits and brush them with the first tooth eruption. Initially, it is the parents who brush the babies’ teeth with a damp gauze or with a special thimble that can be purchased in baby stores.

Towards the age of 3, the child is apparently able to brush his teeth independently, but he cannot be expected to brush high quality, which will really clean all the surfaces of the teeth, before the age of 6.

How do you brush your baby’s teeth correctly?

Brush your teeth twice a day: after breakfast and before going to bed. It is recommended to start brushing the baby’s teeth on one side of the mouth and systematically move to the other side. Brush a few teeth at a time and go over the same teeth a few times.

Brush both the outside of the teeth and the inside, as well as the chewing part. It is important to brush as close as possible to the gums, including the meeting place between the baby’s gums and the tooth. The process takes about two minutes and maintains oral and dental hygiene, as well as general health.

How do you choose the first toothbrush?

The toothbrush should be adjusted to the size of the mouth. You should use a soft brush whose fiber ends are made of rounded nylon. A hard brush can injure the child and cause damage to the gums. All the known companies have brushes designed for use by children according to age.

Brushing can be made easier and turned into a game by using electric brushes intended for children or by brushing while playing and playing a song that is over two minutes long. There are apps for mobile devices that aim to support proper brushing for children.

When should a brush be replaced?

When the brush changes its shape, and the fibers open in all directions, usually every three months.

What first toothpaste to brush teeth with for babies?

Babies’ teeth should be brushed with a toothpaste suitable for children.

What amount of ointment to use?

A small amount the size of a pea is enough to brush your teeth.

Up to the age of two you can be satisfied with an amount of paste the size of a grain of rice.

Accidental ingestion of a small amount of ointment does not cause harm.

What else do you do to keep your teeth healthy?

Avoid eating sweets and drinking sugary drinks, eat continuously between main meals and go to a dentist every six months starting at the age of one.

Tags1st tooth teething the first tooth when does teething start

Fever in babies and children: the complete guide

Fever in babies is a common symptom and may appear many times a year. What is considered high fever? What are his symptoms? How do you measure heat...

How to calm a crying baby?

The baby won’t stop crying and it’s driving you crazy? You’re not alone. Here are some recommendations for calming a crying baby...